Before I start getting neck deep into physical and procedural measures we can take to defend the old homestead I feel that a brief overview of tactical thinking is probably in order.  At this point we are primarily concerned with defensive theory so I’m going to introduce you to a few things that will help you understand and use basic processes a little easier.  Note I’m not a fan of the Military Decision Making Process (MDMP).  It’s not simple nor probably realistic for our purposes.  Due to those facts I’m going to present some easier tools to work with.

The first concept I refer to is known as the “OODA Loop“.  It’s a brilliant little model developed in the late 50s by an Air Force Colonel named Boyd to depict combat processes.  It’s very simplicity is it’s brilliance.  The simplified OODA loop we’re going to use consists of four logical stages that occur in almost any action.  Those four stages are: 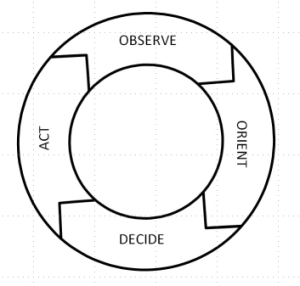 Observe: The time frame in which a person or group collects information about its opposition or environment or becomes alerted to a threat or issue.

Orient:  The part of the process in which you develop concepts or courses of action by measuring your assets or capabilities against the perceived actions or composition of the threat.

Decide: The point in the process where you make the decision to commit to a course of action.

Act:  The physical action of carrying out the decision you made in the Decide phase.

Pretty simple, eh?  Those definitions are actually way oversimplified but will work for now.  The OODA Loop is called a loop because it is a process that continues until either you or the threat are neutralized.  As I stated the beauty of this model is that it can apply to almost any combat process.  And understanding how it works will give you an edge.  How?  Well if your threat is in the Decide or Act phase and you change the environment on him his action may be faulty if it relied on conditions he brought through the Observe phase.  The key is to disrupt his decision loop by getting inside of it  thereby removing the advantage he has.  A simple example:

A threat has been observing your homestead (his Observe phase) with the intent to hit you.  He notices you seem to always park a vehicle between a woodline and the house about 50′ from the house. In his decision phase he decides he’s going to send two guys around to move out of the woodline under cover from that vehicle.  But the night before you decide to put that vehicle in the barn thereby denying him cover.  You have impacted his Action phase by forcing him to alter his plan or execute it with additional risk.

That’s just a simple example and there are dozens out there.  My key point is this: by disrupting the threats OODA loop in any possible way you reduce his effectiveness and disrupt his actions.   In relation to defense that creates a point in which you could take the advantage away from an attacker and exploit it to remain inside his decision loop while you hammer him.  And an attacker that is forced to go into hasty defense will quite often do something really stupid.  You ideally want to have as fast a transition as possible from the Orient to the Act phase.  Faster than the threat and it becomes advantage you.

So how do we apply this concept to planning defense of the rural homestead?  We take it and apply it to any action or measure we employ.  By doing something as simple as avoiding any routine we can make it more difficult for the threat to fully develop information during his Observe phase.  That could include  where you park vehicles at night, the time of day you swap any guards, and even the part of your pasture where you put the herd to bed.  I’m not going to get too deep at this point on how the OODA loop actually carries into the active fight because we aren’t at that point yet.  But stash this away for later because I will reference it again.

So I want to apply the OODA loop to my defensive planning process.  With a little brainstorming and using information I’ve gathered along the way my initial defense planning cycle will take into account these types of information during the Observe cycle:

Basically during the observe phase you want to get an as current and clear picture of your situation as possible.  Next we move into the Orient phase.  During the Orient phase you measure your total resources against the threat composition and capabilities and once you have completed that then using the information from your terrain evaluation you begin to tentatively plan defensive measures by allocating your resources and capabilities against possible attacks through wargaming by asking yourself questions like “which locations am I most likely to get hit from” and “what can I do to either neutralize or disrupt an attack from that location”.  Don’t just settle for “They’ll probably come out of the north woodline” but wargame everything – multiple simultaneous small teams attacking, setting fire to a building in the process, etc.  Basically the worst possible scenario you can come up with.  At this point it’s a good idea to evaluate any wargaming outcomes and probably even apply the AAR format (below) to your wargaming.  Once you have completed the Orient phase you’ll probably come up short on resources for defense.  This leads into the Decision phase.

During the Decision phase you have to make a conscious decision on which measure you’re going to implement.  Unless you’re stacked deep in materials, capabilities, and time you’re probably going to have to sacrifice one part for another.  Prioritization (remember that?) is part of this decision process.

So we’ve decided on what measure we’re going to take.  Now get offa yer ass and get hot on them in the Act phase.  During the initial course of defensive planning this is where you initially employ all of those measures and capabilities.   And once they are in place we’ve completed our first trip around the loop.  But it IS a loop and that means a continuous process.  This is where you go into a evaluate /sustain/improve/cycle in conjunction with the loop.  IMHO you should evaluate the effectiveness of your defenses daily.  Run yourself through the loop and while doing so during the orient phase take into account known/assumed changes in the elements I listed above.  During the sustainment Orient phase critically evaluate your defenses during and after wargaming and developed any possible changes you may want to make and prioritize those changes.  If you need to make changes then once again during the decision phase prioritize those measures and decide which ones to implement during the Act phase.

Now comes another instance where you have to change things up.  If you get hit and survive then you need to instantly start running through the loop again but this time as part of the Observe cycle we really need to conduct an After Action Review (AAR) before we go any further.  Most of us .mil types have sat through good and bad AARs and are familiar with the process.  I’ll simplify it a bit here but the concept is still the same.  During the AAR process you want to identify what you plan was and strengths and weaknesses of and in its execution.  To do this you identify the following kinds of information (and having everyone from the family sit in and participate is a solid idea – you’ll get a broader view of what went on):

These basic questions if answered honestly will help you to refine your defensive plan but more importantly will help you identify what weaknesses you have.  By using some simple but sound tactical thinking in planning and executing our defenses they will evolve to become more effective.

Some further reading for those so inclined:

The OODA Loop: A good evaluation of Boyds processes written as a thesis by an AF Captain

Semi-retired career and contract troop. I own and maintain my own small ranch out here in beautiful rural America.
View all posts by Treaded →
This entry was posted in Defensive Measures, Security Planning. Bookmark the permalink.