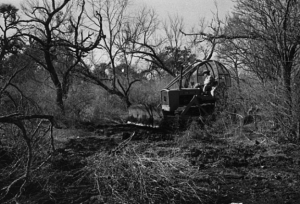 Surgery went well and it’s time to get back in the saddle.  So far we have conducted a terrain analysis of our immediate AO and using the acronym OCOKA (Observation and fields of fire, Cover and concealment, Obstacles, Key terrain, Avenues of approach) and found ourselves needing to do some in-depth addressing of issues we identified during the study.

The first issue we’re going to address is Observation and fields of fire (the first O in OCOKA).  If you refer back to the “More Concepts To Take Into Consideration” entry you’ll see our fields of fire and observation sucked – big time.   To save you a click here’s the determination we made with the gray areas being deadspace (which we previously referred to as simply blind spots). 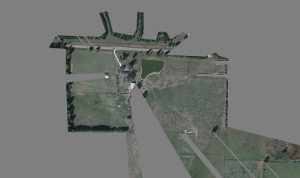 Those gray areas are areas which we can neither see nor fire into from the house which is going to be our final defensive position.  So some serious work is in order to fix this as best we can.  The best way to clear a field of fire in relation to a fixed fortified position is to completely clear it – leaving no depressions or vegetation that would provide cover and concealment for the threat to use thereby creating killzones (areas devoid of cover and concealment which a threat must cross to get to a certain position).   So what/how far do we clear?  At this point I’m going to assume two basic realistic constraints and one guide in planning this that can be applied either before or after TSHTF:

IMHO I want to clear anything that will provide cover or concealment on my land out past the range that normal carbine fire would be accurate.  In this instance referring to our zone map that would be out to Zone D which is out to 550 meters from the house.  Looking at my analysis once again I’m going to identify the areas that need attention to fix this and go into measures to remedy those issues. 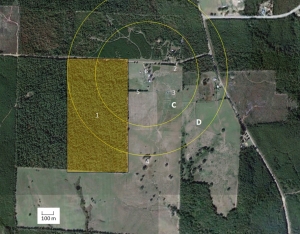 Looking at the picture above I have removed both the A, B, E, and F zones for clarity however left C and D to keep a perspective on range and our effort.  I have also annotated the issue areas by number.  The numbers represent the areas we need to address.  Those areas and fixes are:

1.  We need to clear that woodline to our immediate West.  It provides the threat with the capability to deliver rifle fire from cover and concealment from well within the effective range of a carbine and has to go.  But loosing that timber isn’t necessarily going to be a bad thing.  If we contract and sell that timber now to a logging company we can get a few grand out of the deal and save ourselves some labor.  Money made, work done, cash in our pocket – always a good deal.  So by contracting that entire areas annotated by #1 we come out ahead.  If you wait until TSHTF then it may be too late and you’d have to do it yourself – a huge job that I wouldn’t want to try to undertake while having to stay frosty watching for a threat.  One thing to remember when doing this:  You’re going to get left with a lot of brush and stumps and the ground is probably going to be torn to hell.  If you specify in the contract that no stumps shall remain higher than say 3 to 4 inches you’ll deny the threat any significant cover behind a stump and impede any vehicle crossing that area.  A 4 inch stump will beat the hell out of most pickups and slow their advance across that area to a crawl.  After it’s been cleared some work with the tractor and it’s blade and bucket can cut any humps and small hills down and fill depressions but it might also be a good idea and invest some of that cash you made on having a dozer come in and do that work if you don’t have one yourself.  A controlled burn will help get rid of some of that brush as well.  Anyhow once I have it cleared I would pursue one additional effort in this area.  I would lay my hands on some goat fencing and fence the entire area in and put some meat goats in there.  Not only would they provide an additional source of food but they will help to keep that area picked clean of concealment.  To provide them some shelter you can throw a small pole shed up in the southwest corner and it shouldn’t negate your efforts to this point.

2.  My storage area for my round haybales has to be relocated.  It provides cover and concealment  entirely too close to the house.  So what I would do is relocate them to the open area in the very southwest below immediately the treeline.  It would require some additional fencing (you have to keep cattle away from them our they’ll tear the hell out of them)  but it gets them out of the way.

3.  That junkpile out by the fence has to go.  I might be able to turn a few bucks for scrap after salvaging anything I could off of it but that’s hard cover inside of 400 meters for the threat as it sits.  So either sell it for scrap or drag it out of the way (maybe down by where I’m placing the haybales at).

4.  Those trees down by the southern edge of D need to go.  Once again cover and concealment too close.

5.  That treeline along the fencerow has to go as well.  It’s cover and concealment along a line that is within a hundred meters of the barn.  A logging company more than likely isn’t going to want to touch it because of the fenceline but if they do great – get it done in conjunction with A.  If not it’s time to get the chainsaw out and fix that.  Once again any stumps should be less than 4 inches in height.

6.  The area immediately around the house is where we’re going to get a lion’s share of the work done.  Every tree is going down, any unnecessary buildings are coming down, etc.  That barn to the immediate west (the one with half a roof) is definitely coming down.  When I tear it down I’m going to leave the tallest supporting pole in place and if it has electricity to it I’m going to leave that in place as well.  That will provide me with a ready made mount for lights on later.

At this point you might be wondering why I want stumps no taller than 4 inches.  Well it’s a lot of work to actually completely get rid of a stump although with the amount of clearing we’re going to do a stump grinder would really be a good asset to have.  But if you don’t grind, dig, blast, or remove them in some other way you want to get them to no greater than 4 inches in height.  A 4 inch pine stump is hell to hide behind but yet is still feasibly tall enough to get a good cut in with a chainsaw.  And if you’ve ever hit a 4 inch stump in a vehicle it’s a pretty solid object capable of tearing up the suspension on a truck.  Not a great obstacle but still functional (more on obstacles later).

So we get it in gear and once we have finished the land looks a little like this.  As always excuse the artwork – I’m not an artist. 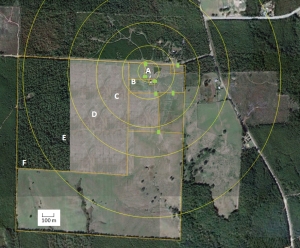 I’ve added the fences and gates (lines and rectangles) back in on this view.  Notice how that area that we originally assumed to be the most likely threat axis of attack is now wide open?   We’ve got a lot better field of observation and fire not only to our west but generally all around.  All of the trees (including the ones along the road) within Zone D have been cleared out.  Given the nature of the terrain IMHO the most likely enemy axis of attack would now focus from the north however the trails leading to those trail to our north are observable.  Could this position be better?  Absolutely – it should be further away from that road but it is what it is and what we have to work with.  IMHO the money gained by contracting that cutting to the logging company would be best spent buying that land to the immediate north and after that the  parcel that runs along the road to our east.  But for now we’ll assume those aren’t for sale within our means.   One thing to note is we have increased not only our but the treats visibility of our immediate AO as well.  When you start getting into building defensive positions there’s always a pro and con approach.  In this instance it’s a pro because yes I did increase the area the threat can observe however I forced his range to fire and maneuver from cover out to the extreme edge of his probable range.  Be cognizant of these trade offs and evaluate them accordingly.

At this point I want to address some tools you’ll need along the way.  You might have some or most of these but they’re definitely things you want to stock up on.  First up is a good chainsaw with all of the odds and ends to keep it running.  A chainsaw is one of those tools that is indispensable in my eyes.  I remember as a kid my grandfather actually using his to cut all of the lumber to build a pole shed on the backside of his land.  They’re that handy.  The other thing you’re going to want is a tractor with as many different attachments as you can get.  A blade is good for leveling ground and doing very light dozer work (very light indeed).  A front loader with a box is another thing that makes moving dirt and sand a lot quicker.  A PTO auger is a must in my eyes and it’s going to make emplacing some of our vehicular obstacles an easier task later on.  A good plow and a disk are also going to make some of the things I address later on easier work.  Backhoe attachments are kind of pricey but also a good investment.  Truth be told I always keep my eyes out for used attachment in good condition.  There’s not a lot around my ranch that I can’t do with my tractor anymore – they’re just that handy.  But be realistic about a tractors use.  It won’t do the same level of work as fast or well  as a dedicated dozer, backhoe, or ditching machine.

Next up we’ll look at some methods of cover and concealment including starting to build our defense in depth.  And although this position is less than ideal at this point it’s getting better.  Will it ever be perfect?  No position ever is – that’s the trouble with real terrain vs. textbook terrain.  But it is becoming defensible which is our goal.

Semi-retired career and contract troop. I own and maintain my own small ranch out here in beautiful rural America.
View all posts by Treaded →
This entry was posted in Defensive Measures, Hardening the Homestead, Security Planning, Terrain and AO Development. Bookmark the permalink.