Putting Some Teeth in the Tribe: What Do We Need To Be Able To Do?

Alright – a new topic (here anyway)  and a lot to write about. Now we’re going to start digging into the process of actually building usable fighting skills and knowledge among your tribe members.  The next few entries are going to attempt to impart upon you some basic realities you’ll be dealing with along with some nice simple tips to use when establishing your security force.  To set the record straight right now I’m going to be referring to what I call a “Rural Defense Force” (RDF) throughout this series.  That is simply the defensive element of your tribe.  The folks that actually defend the area.

This entry is going to deal with defining operational capabilities and using a simple training methodology.  Operational capabilities are the tasks that you need/want to be able to execute.   I.e. do you want to establish roadblocks, conduct ambushes, raids, deliberate defenses, etc?   You need to sit down and conceptualize what tasks your RDF will have to accomplish.  This is how you focus your training as your efforts need to be geared towards supporting these capabilities.  For the .mil guys out there this is what we used to refer to as a developing a Mission Essential Task List (METL) along with associated drills but we’re going to go through this without the luxury of having higher echelon tasks and directives to work this out. Basically we’re going to build a list of tactical tasks that we identify are critical to the defense of our tribal area.  The difference here is normally a METL goes no lower than a Company but unless you’re really fortunate chances are you won’t have the kind of strength.  So I’m going to make another convention at this point – when I refer to METL what I am actually using are more akin to ARTEP battle drills for a Platoon and Squad sized element.  Training methodology is simply the way we’re going to train.

Before you begin this process it’s a pretty good idea to go through a throughout terrain and threat analysis.  As an example if the threat is known to not and will not likely have armored vehicles then establish an anti-armor ambush would be low on your task list.  If you need some help identifying tasks this is where the Army field manuals can come into play.  Take a look at ARTEP 7-8-Drill which lists tasks for the platoon and squad sized elements. The lists in that manual should help you identify the kind of tasks you want to be able to accomplish.  Are we going to use the info from that manual verbatim?  No we’re not. But for now use it to help identify tasks. 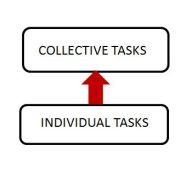 Dose of reality time: There are some tasks which will probably be worthless and some you won’t have the resources to accomplish.  An example of a worthless tasks for your purpose might be “Change formation (mounted)”.  That task is designed for forces that are mounted in vehicles and have the terrain to actually change their physical association during travel. Granted if you live in the desert it might be worthwhile but that’s just an example.  A task you might not have the resources to execute would be “Knock out bunkers”.  Now does that mean we ignore them?  Not necessarily.  The possibility to adapt and develop techniques to deal with those tasks using our existing capabilities might just be worthwhile.

So we’ve gone through our analysis, familiarized ourselves with tasks, and for Shits n’ Giggles we’ve come up with this list of critical tasks.  To keep it simple we’ll focus on one task for right now: Conducting an ambush.  Sounds simple right? Welp there are different categories of ambushes (hasty, deliberate) and different types (point, area, L shaped, etc.).  Don’t get lost in the weeds at this point instead focus on the general task itself and identify the collective and individual skills required to support this task.  The graphic below illustrates how those individual tasks support the collective tasks.

In the graphic notice I circled the “engage targets” individual task.  Sounds simple enough but think about what that task entails.  It could include such supporting skills like :

Semi-retired career and contract troop. I own and maintain my own small ranch out here in beautiful rural America.
View all posts by Treaded →
This entry was posted in RDF. Bookmark the permalink.